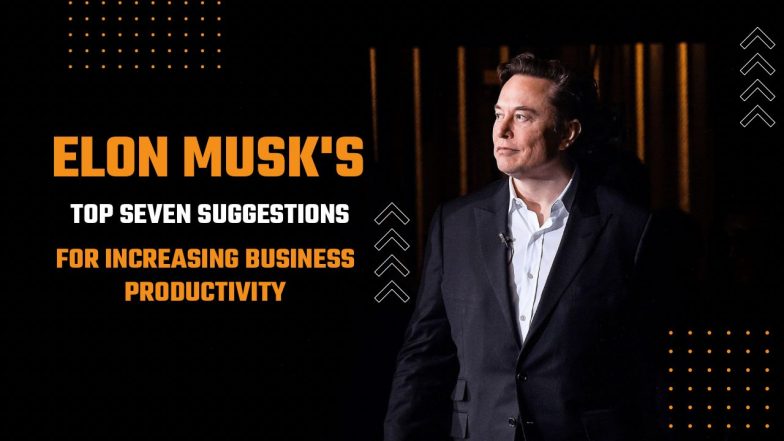 Elon Musk is always in the buzz for the things he does and the suggestions he offers. When Elon Musk isn't rambling on about Mars exploration or the planet's dwindling population, he has some unexpectedly applicable business advice not only for his employees but for every young individual out there. Whether you want to be an inventive business owner or a productive employee, you will learn a lot from the richest man on the planet. You can also consult a business trainer for the best outcomes on the same.

"Too many meetings are a burden on large corporations that frequently worsen over time," Musk said. He suggests canceling all long meetings unless you are certain they will benefit the entire company. Even if you're sure they'll be of interest to some of the employees, he suggests keeping them brief.

2. Meetings should be held less frequently

As per the Tesla co-founder, company meetings are frequently too lengthy, but also too frequent. That's why, except if the matter is "critical," you also must avoid holding frequent interactions. "Again when the urgent issue is resolved, the frequency of board meetings should decrease significantly," he says.

3. Avoid meetings where you aren’t contributing anything

While quickly quitting a meeting could be seen as unfriendly in many cultures, Musk argues that staying would be more impolite.

Musk advises that one should leave a meeting or end a conversation as soon as it is clear that you are not contributing. He says It is impolite to have somebody stay and waste their time and not disrespectful to leave.

4. Whenever possible, omit the "chain of command"

Musk argues that honoring the line of command isn't necessarily the greatest point of contact when talking about something, despite the worries of many people about disrespecting or terminating ties.

According to Musk, communication should take the quickest route possible to complete the task at hand rather than going through the "chain of command." The phrase "Any boss who tries to enforce chain of command communication will quickly find themselves working somewhere" is used.

5. Get rid of any jargon or phrases that are confusing

Musk's suggestions can be implemented in your business even though they are made for his own companies.

At his company Tesla, he advises not using meaningless terms or acronyms to describe items, software, or procedures. He says, "Communication is generally hampered by anything that needs an explanation. Nobody should need to know a dictionary to work at Tesla." You can apply this to your business and get easy at communicating.

Poor departmental communication is one of the key causes of major problems, claims Musk.

He says that enabling open communication of any information between all levels will solve this problem. Super dumb things can happen if a single employee has to go to their supervisor, who goes to a manager, who speaks to a vice president, who talks to another senior VP, who talks to then talks to someone from a higher authority just to acquire something done across departments.

7. First and foremost, use your common sense

According to Musk, a "business rule" should be changed if sticking to it is simply silly in a specific instance. He says that in general, one should always follow common sense first and then the rules.

Reasons To Start a Food Business in India

These 5 Smart Ways Will Settle Your Business Debts Quickly

From MP to PM: 5 Interesting Facts about UK’s new PM Rishi Sunak that will Amaze You!

5 Top Investment Tips From Warren Buffett For Every Investor

How to build a Successful Business with White Labeling?

10 Business Quotes By Dr. Vivek Bindra That Are Pure Gold For Your Business!