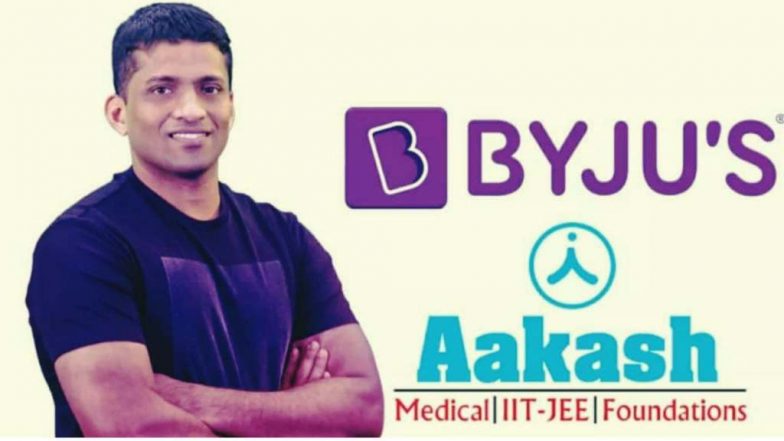 Edtech Unicorn BYJU is in the news once again, and this time for signing a deal with Aakash Educational Services for a whopping $1 billion. According to reports, BYJU`s has acquired brick and mortar education player Aakash Educational Services (AES). Although both parties are yet to make an official announcement regarding the deal, it is one of the largest ed-tech acquisitions in that world.

While online learning startups have flourished, offline tutoring centers are affected badly. Bangaluru based BYJU`s has a valuation of $12 billion and has been on a fund-raising spree due to the increased demand for its online lessons because of the global COVID 19 pandemic.

While Blackstone will swap 37.5% equity in Aakash for BYJU`s stake, the deal will witness a complete exit of the Aakash`s founders, the Chaudhry family. According to reports, the Chaudhary family may get a cash payout of $300 million.

When combined, this significant deal would focus on the innovative approach to teach students in secondary education, and prepare them for the entrance examinations.

BYJU`s was founded by Byju Raveendran, who was a former teacher, who also came up with a mobile application for smartphone users in 2011. From kindergarten to the 12th grade, BYJU`s provides lessons in science and mathematics through video games and animations.

Last year in September 2020, BYJU`s announced that around 70 million users logged in from over 1,700 cities all across the country, during fundraising. Out of 70 million, over 4.5 million are paid users. The application has been adding more than 5 million users a month. India`s biggest Edu-tech firm aims to double its revenue to $1 billion in the current financial year ending in March 2021.

If there is a startup business idea that you would like to work upon, do not wait, anymore! Take our Everything About Entrepreneurship course and learn from some of the topmost industry experts that will guide you through their experience.

Take insights and gain knowledge about how business works and can grow even in challenging times. Visit here : www.badabusiness.com

Want to Have Your Own Business But Facing Budget Issues? Here are 5 Businesses You can Start Under Rs 10,000

A Success Story of Indian Startup that Braved the Pandemic to enter the Elite Unicorn Club!

Phone to Fork: How Foodtech Industry in India is bringing a Revolution!