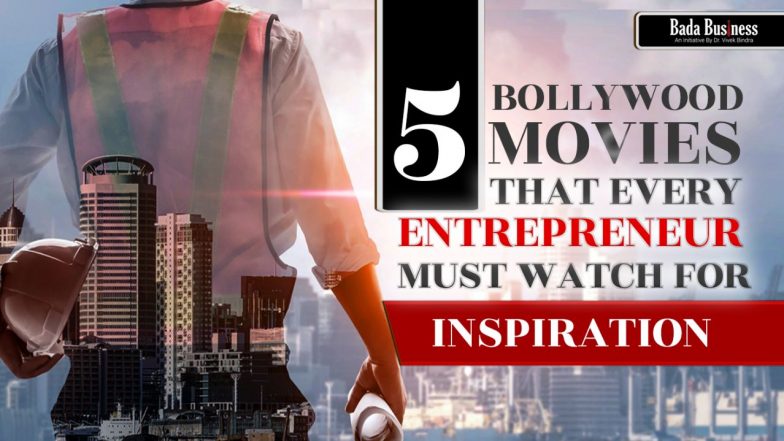 Movies, whether from Bollywood or Hollywood have always been our window to the other world. While some are meant for pure entertainment with perfect comic timing and dialogues, some touch our hearts with their high emotional quotient and heartwarming script. There are some masterpieces too that give you food for thought and showcase human tragedy. Then few more Bollywood movies showcase the triumph of human life and influence us in some way.

So whether you want to become the best business motivational speaker or an artist, the road less taken often has a rough path. And though we already know that being an entrepreneur is not an easy deal, what could be the best medium other than movies to showcase the journey of an entrepreneur in India? So we have handpicked five desi movies that show the passion, tenacity, and undying spirit of its characters that all entrepreneurs can relate to:

‘Old is gold and this epic movie by the legendary Guru Dutt fits the bill completely. Playing the protagonist of the movie, the actor plays the character of a poet with an undying passion for writing poetry. His poems are quite radical and showcase the ordeal of the destitute. He also pens down the arrogance of the rich after the departure of the British from India.

He is frowned upon by his brothers, who sell away his poems as waste paper. After lots of struggle, he becomes frustrated by the hypocrisy around him and declares himself dead. It is only after this that the publishers embrace his work and he becomes famous.

Takeaway: The story speaks about the never-dying passion of entrepreneurs for their work and how despite the challenges that society and life throw, they keep on going and come out as a winner.

If you are not aware of the truth behind the formation of the ‘Amul Co-operative Society’, you can watch our extremely informative case study here. You can also watch this old classic movie Manthan which revolves around the story of a vet doctor who comes to a village. The doctor aims to open a milk cooperative society for the welfare of the villagers.

He faces lots of resistance from the rich businessmen and the head of the village. The movie showcases the real-life journey of Dr. Verghese Kurien- the father of the White Revolution in India and how the Amul Cooperative Society was formed.

The Takeaway: The helplessness of the protagonist is real and the movie beautifully does justice to capture the hurdles entrepreneurs often face in the beginning.

Another movie from the deck of old, this film captures the life of a young unemployed man who has ambitions and dreams of starting his startup. He starts a galvanometer business but the company fails due to high competition in the market. He drowns in bad debts and faces lots of challenges in his personal life as well. However, the protagonist mends his ways and eventually emerges as a winner.

The Takeaway: This movie may appear very simple on the surface, but deep down it teaches us to be ambitious and follow our passion. It does not matter from where you are coming, chase your dreams with all your heart, learn from your failures and move on.

Behind every startup, there is an entrepreneur who is working on a problem at the grass-root level and this movie revolves around the same. The protagonist, played by Shahrukh Khan is a young scientist working as a project manager at NASA who comes to his village to find his nanny. The village which is full of diversity, colorful and complex helps to draw a parallel contrast between the two different countries which compels the protagonist to go on a quest to generate electricity for his village.

The Takeaway: The movie sends out a million years old messages of ‘Unity in Diversity and clearly states that a country’s strength lies in its people. Along with that, it poses a vital question- what should we do as responsible and intelligent members of society?

Guru probably is the most obvious entry into this list. Based loosely on the life and times of Dhirubhai Ambani, Guru shows an ambitious middle-class boy who is full of business ideas and wants to make it big in the business world. He gets married to a rich businessman’s daughter and uses the money he receives in his wedding as a dowry to start a business. The controversial film follows how he uses his skills and ambition to create one of the richest companies in the country.

The Takeaway: Though the protagonist in this movie is portrayed to be cunning, over-ambitious, and manipulative, he also encourages us to believe in our dreams.

The five movies that we have mentioned above will not just be entertaining, but will also offer a reflection of our society and the challenges that businessmen often experience. So watch these movies and enjoy!

To know more about our programs, visit: www.badabusiness.com