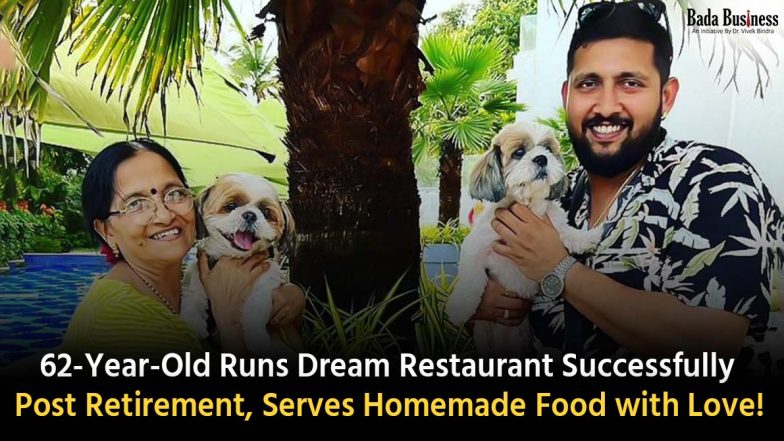 Who said after a certain age retirement is the only resort for elderly people? Inspiration can find you at any age! The only thing that it demands is that you recognize your calling. Discovering passion and rekindling your dreams at the age when people expect you to retire is the new ‘IN’ for senior citizens.

The person who we are talking about is Smita Surendranath Blaggan- a 62-year-old restaurateur based in Goa who after getting retired from her government job made her way into the hospitality sector chasing her dreams. Her lake view restaurant is the labour of love and passion of hers and her son Rohit (30).

A Blend of Diverse Culture

Born in Karnataka’s Dharwad district, Smita is a Maharashtrian who married into a Punjabi family. The stark contrast between the two cultures would have given a cultural shock to anyone. However, for Smita, it was a boon. With such a diverse family background, she received exposure to multiple cuisines and flavours.

Not only is she well-versed in different world cuisines such as Italian and continental, but also speaks multiple languages like Punjabi, Konkani, Goan, and Maharashtrian. Smita likes to make all the spices on her own that she uses in her lip-smacking dishes. When it comes to shopping for raw ingredients such as fruits and vegetables, she ensures to do it on her own.

However, the Journey was not Easy!

Smita and her son Rohit started their restaurant in March 2020. But before they could start their operations, the nation went under lockdown due to COVID-19. The following months were full of uncertainties, anxiety, and a sense of unease.

But as they say, good things and good coffee take time to brew, this mother-son duo waited patiently during that time as they were super-confident about their food cooked with delectable flavors and lots of love.

All Roads Lead to Good Food

Recalling her younger days, Smita says, “I remember cooking as early as 10 years old, making jawar roti for my father. Even after I got married and moved to Goa in 1986, food played a very important role. I am a foodie and so I’m always on the lookout for new cuisines and foods to try.”

She continues, “My mother and mother-in-law were both wonderful cooks and I have learned a lot from both of them. My love for good food was so strong that I enjoyed coming into a Punjabi family and learning so many new things. In fact, after eating my mother’s mutton curry, the smell would linger on my fingers for up to three days and I would love that.”

Soon after her marriage, her place became the favorite spot for everyone when it comes to relishing delightful food. From her husband’s colleagues and bosses or her children’s favorites, the food that she whipped attracted people like a magnet.

The 60s’ Gave a New Direction to her Life

For many people starting a new business post-retirement happens by chance. But Smita always wanted to own a restaurant. It was a conversation that she often had with her late husband as well. Every time she would host a bunch of people at her home, her husband would often suggest that food is her true calling.

The restaurant was started when her son Rohit returned to India from Dubai in 2020. Starting initially with a minimum investment of about INR 25 lakhs, her restaurant is located right next to a shimmering lake with a seating capacity of 150, which provides this place an edge over other cafes.

Along with a spectacular view of the beautiful lake, Smita ensures that her guests receive nothing but the best Goan food in Goa. She is particular about everything that happens in her kitchen. From making garlic and ginger paste to the freshly pound masala, everything is made once the order is placed.

Smita says that every day comes with its unique challenges which make life even more interesting. She says, “What is life without some masala and drama.”

From flipping the pages of a cookbook as a young girl to now becoming a proud owner of a restaurant enveloped in the aroma of her various recipes, Smita shares that she is living the dream of her life.

Do you have a business idea that you would like to turn into reality? Don’t wait! Start working on it today! The idea of managing a business is easier said than done and we completely agree with you. This is why to help you move forward with your business goals, we at Bada Business offer an exclusive Business Coaching Program that comes with Foundation courses, specialized courses, and value-added courses.

To know more about our courses, visit: www.badabusiness.com