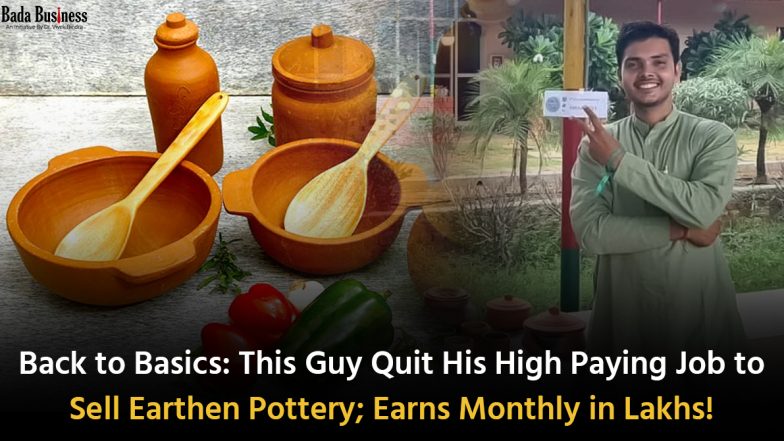 Where non-stick utensils offer great comfort while cooking food, few people know about the harmful effects of using them at home. These utensils are not just harmful to our health, but also damaging to the environment.

But then what is the alternative? While the market is flooded with products claiming to be harmless to the environment, it is better to exercise caution.

Earthenware utensils that were once used by people before the modern utensils paved their way into the market and our household may seem like an alternative. However, there are lots of fake products in the market that are being made with a die-cast mold with a chemical coating on it.

Such earthenware might end up causing more harm than we know of. To provide a solution to this modern-era challenge, Neeraj Sharma- a resident of Dawla village in Jhajjar (Haryana) came up with his startup up- ‘Mitti, Aap Aur Main’. The business is now yielding a monthly turnover of INR 2 Lakh.

Neeraj completed his engineering from a college in Rohtak in 2016. After that, he got a job with an MNC in Gurgaon where he stayed until 2019. While living in Gurgaon, he experienced multiple health issues. After some time, he went back to his village and told his parents that he wanted to prepare for the civil examination instead.

Upon returning to his village, Neeraj decided going back wasn’t an option. He intended to find some business to engage in while staying in the village. At home, he started noticing various kinds of earthenware. While some utensils will break easily, others will sustain for a longer time.  They were sturdy and environment-friendly because of their natural composition.

Intrigued by such observations, he made a trip to a nearby factory where their earthenware products were manufactured. He thought the factory would have many artisans working on these products, however, he was stunned by what he saw. Upon entering the factory, Neeraj saw there were various kinds of machines that were churning out these products with zero human input. Given there is much demand for earthenware, the sight gave him a business idea.

Initially, he started by using molds and dyes, but soon he realized how toxic chemicals like caustic soda and soda silicate were while making the products. He conducted some basic research and realized that these were harmful chemicals.

Made his way Back to Basics

Once he realized how harmful those chemicals were, he decided to find a way back to the traditional way of pottery. His search took him to some of the traditional potters from his village who had lost their jobs due to the advent of machines, but they were looking for an opportunity to put their skills to use again.

Initially, only two potters saw merit in his idea. They used to make products with absolutely no chemicals in them. However, it was difficult for him to compete with products that were all beautiful and shiny. It took a while for Neeraj to make people understand the chemicals that are being used in the manufacturing process of those utensils.

His products started building curiosity and more and more people began coming to see their work more out of curiosity than anything else.

To spread the word Neeraj used the platforms like Facebook and YouTube to raise awareness about his products and their qualities. Attending local fates, festivals and organic fairs also helped in raising brand awareness. At these events, Neeraj met doctors and nutritionists who were very impressed with the products and started speaking about them. Slowly, people from the city started visiting the unit to buy directly from Neeraj. He says that a lot of the traffic that his business gets is courtesy of the videos he puts up on his channel on YouTube which currently has 1,34,000 subscribers.

Neeraj takes immense pride in his decision of coming back to his village and working with these local artisans. The soil that is used to manufacture these utensils is sourced from Rajasthan and Haryana. The soil in the field is not used to make these utensils as they are contaminated by the use of fertilizers and chemicals by the farmers. One can buy planters, kitchen utensils, and even cookware at prices starting from Rs 250.

With his determination and passion, today Neeraj is earning lakhs per month. We salute his spirit and his fresh perspective toward the environment and society that led him to produce a product that is made from natural resources.

Do you have a startup idea too? Find out exactly what you need to turn that idea into a reality with Bada Business. To know more, visit www.badabusiness.com.