Bharat Ratna for Ratan Tata: A Campaign by Dr. Vivek Bindra that took Twitter by Storm

When Dr. Vivek Bindra requested to confer the prestigious Bharat Ratna for Ratan Tata on Twitter, the popular micro-blogging site embraced it with open arms.

Dr. Vivek Bindra, CEO, and founder of Bada Business is an internationally acclaimed motivational speaker and a business coach. On February 5, 2021, he tweeted: Ratan Tata believes today's generation of entrepreneurs can take India to the next level. We confer the country's highest civilian award Bharat Ratna for @RNTata2000. 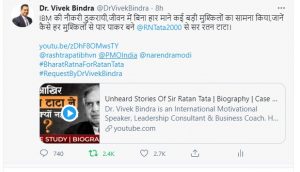 Soon after this tweet, the Twitterati flooded the social media platform in a chorus, urging the Prime Minister to honor the legendary industrialist Ratan Tata.

While one Twitter user tweeted “I want to urge the PMO to award Bharat Ratna to the country's most powerful businessman.”

“One of the greatest humble persons on the earth "Sir Ratan Tata" Request for 'Bharat Ratna Award', wrote another.

Ratan Tata, who hardly makes public appearances or gives interviews is one of the most enigmatic personalities in corporate circles. A distinguished entrepreneur, a powerful business leader, and the most-loved philanthropist, Ratan Tata has always maintained a low profile.

Ratan Tata, the former chairman of Tata Sons is a synonym for the term philanthropy. He was also the chairman of Tata Group, from 1990 to 2012. He also served as the interim chairman from October 2016 to February 2017. Today, he continues to head the charitable Tata trusts.

Despite holding a powerful position in the business world, Ratan Tata has always been a humble figure and inspiration for millions, not just in India, but all across the world. Mr. Ratan Tata has been able to seamlessly combine the distinct businesses into the Tata group. He has made the Tata brand a global name.

Ratan Tata is passionate about what he believes in. Maintaining a perfect professional and personal life balance, he has always asked the young guns of today`s century to focus on both aspects of their lives.

Youngsters and aspiring entrepreneurs look up to Ratan Tata as an exemplary business leader who strongly believes in the Indian startup ecosystem. Till now he has invested in over two dozen startups.

Inspiring, isn`t it? If you too believe that this legendary figure deserves the coveted Bharat Ratna, join us in our campaign #BharatRatnaforRatanTata, #RequestByDrVivekBindra

As the campaign Bharat Ratna for Ratan Tata Trends on Twitter, millions of Netizens Joined In!

Social Media Marketing: 5 Key Principles Every Start-Up Should Follow While Promoting Its Business on Social Media

7 Inspirational JRD Tata Quotes that will Motivate you to Chase your Dreams!