From a Rickshaw Driver to becoming India’s Famous Household Name, Here is a Glimpse of Raju Srivastav’s Inspiring Life! 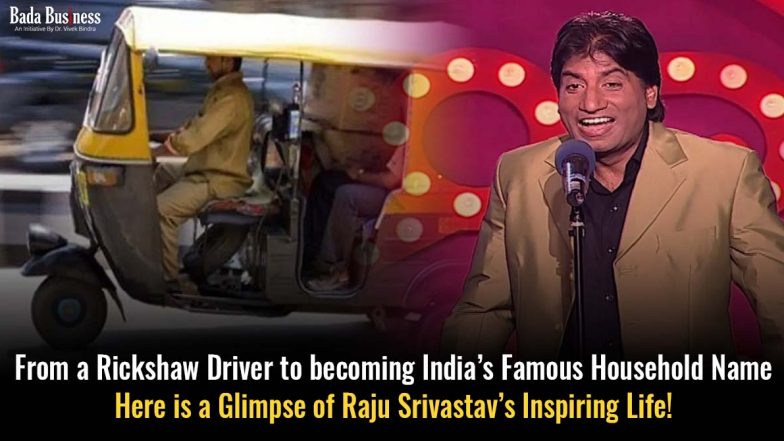 Summary: The celebrated comedian Raju Srivastav passed away at the age of 58 on 21st September 2022.

In 2005, India got its first stand-up comedian Raju Srivastav who participated in a stand-up comedy show which was broadcasted for the first time in the nation. Though the concept was new for the Indians, Raju Srivastav won millions of hearts with his excellent comic timing and simple jokes.

With his “Gajodhar Bhaiya” act, he became one of the most popular names in the Indian household. Although he didn’t win the show, he continued to entertain the entire nation with his jokes for 17 years.

Born in Kanpur, Uttar Pradesh on 25 December 1963, his stupendous comic talent was noticed since he was a young guy. Coming from a modest background his father Ramesh Chandra Srivastav was a famous Hindi poet known as ‘Balai Kaka’.

In an interview with Dr. Vivek Bindra, he shared a few glimpses from his past. He shared how his principal used to support his mimicry while others made fun of it. He was also invited to do commentary during local cricket matches. There he would talk much more about the players rather than the shots as he knew every one of them personally. And that is what attracted people to him.

Started his Journey to Mumbai in the 80s

Raju Srivastav came to Mumbai in the 80s to make it as a comedian; however, the road to success was anything but not easy. During his struggling days, he drove an auto for some time till he got work in movies. He had also done comedy shows for INR 50 when he was struggling to make it big.

Only in 2005, after 20 years, his years of struggle produced the fruit of success and he finally got recognition after participating in The Great Indian Laughter challenge.

After this, he never looked back. He continued to do various stand-up gigs with his clean comedy which is enjoyed by people across all age groups. He has done mimicry of many esteemed politicians and has done impressions of Indira Gandhi, Atal Bihari Vajpayee, Rajiv Gandhi, Mulayam Singh Yadav, Lalu Prasad Yadav, and even PM Narendra Modi.

The chairman of the Film Development Council of Uttar Pradesh and Brand Ambassador of Swachh Bharat Abhiyan, Raju was recently seen on India’s Laughter Champion.

Recently Raju Srivastav suffered a heart attack while working out in a gym on August 10. After 41 days in the hospital, he passed away on 21 September at the age of 58. In 2005, India got one of the best stand-up comedians, and in 2022, our nation lost him.

Want to read inspiring success stories like this? Visit, www.badabusiness.com

3 Uber Smart Marketing Tips That Will Make Your Brand Viral At Zero Cost!