From Doing Embroidery on Clothes to Supporting the Family to Winning Gold in Weightlifting at CWG, Achinta Sheuli’s Journey is Super-Inspiring! 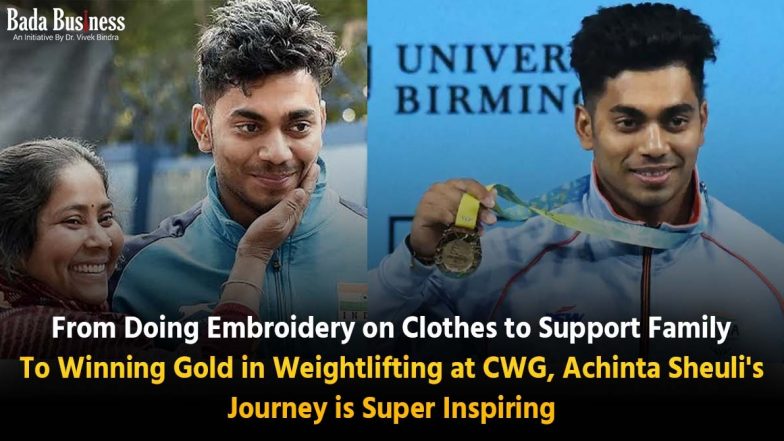 “Success is not final; failure is not fatal; it is the courage to continue that counts.”

Nothing in this world is impossible if you have the passion and determination for it. With sheer dedication and persistence, you can achieve anything that you want in your life. And Achinta Sheuli is the live example!

Achinta Sheuli with his outstanding performance in the Commonwealth Games won a gold medal for India in the men’s 73 kg weightlifting category with a combined lift of 313 kg (snatch 143 kg + clean and jerk 170 kg), creating a new CWG record. From embroidering necklines on women’s kurtas to working in fields Achinta Sheuli has come a long way to creating a record in CWG his journey was anything but smooth!

Hailing from Deulpur in West Bengal, Achinta was first introduced to weightlifting by his brother. His brother Alok was fascinated by weightlifting after watching a body-building competition. Seeing his interest his mother Purnima took him to a gym run by Astam Das in 2010. Achinta followed his brother to that gym after a couple of years, and took to it, as a fish takes to water. Das trained them for free and provided nutritious food too.

But the turning point in Achinta’s life was the Junior National Championship held in 2013 in Guwahati, Assam. Achinta came fourth and was noticed by the Army Sports Institute. Alok said that Achinta was called for a trial by the Institute in 2014.

After his father passed away, it was very difficult for his family to survive financially. Their financial status was so poor that they did not have money to even perform their father’s last rites. To bring food to the table, his mother started doing needlework, and the kids joined in later. They would receive orders to embroider the necklines of women’s kurtas.

The family used to work for 12 hours a day, seven days a week. It was a hard job. On a very good week, they would make INR 1200. While on an average week, it was less.

Achinta and his brother also worked in the fields, harvested crops, and carried the loads on their head because they were given an egg a day and a kilo of chicken at the end of the day.

His Brother Was His Biggest Support

After his father passed away, Achinta’s brother Alok had become the breadwinner of their family. To support his mother, Alok gave up on his dreams. The training and food at Army Sports Institute helped Achinta get strong and gain weight. And he would train and embroider whenever he had the time while going to school.

And the Journey Began…

Achinta left his local school in class 6 and completed his further studies at the Army Sports Institute. He then participated in Youth National Games in Haryana and came third. He later joined the Army in 2015 and received a letter from the Indian camp. He won a silver medal in the Youth Commonwealth Games which was organized in Pune. He went on to win gold at the Commonwealth Championship in 2019 and silver at the Junior World Championship in 2021.

Thanks to the Army job and stipend, Achinta is now able to support his family. His mother does not need to do the needlework anymore and his brother Alok is focusing on his career now.

Achinta believes that a target, focus, and discipline are essential to succeed in life. And rightly so, he has made the entire nation proud by winning gold at the CWG after Mirabai Chanu and Jeremy Lalrinnunga.