These 10 Books Recommended By Elon Musk Will Open A Whole New World Of Knowledge! 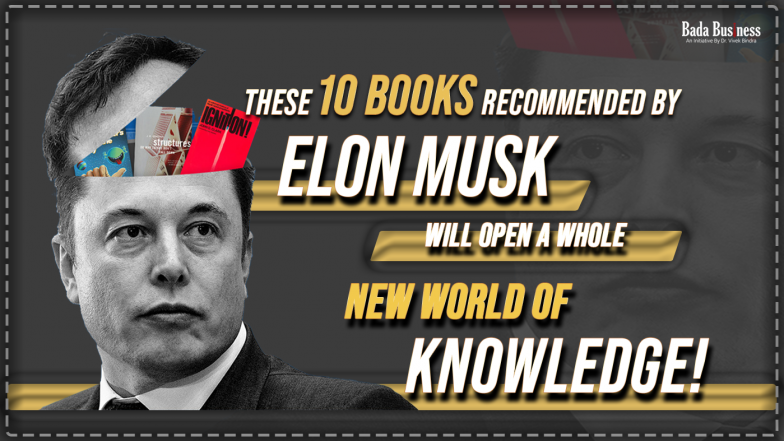 “A book can be your best friend.” Sometimes it can be your peaceful escape, while other times it can take you to a world, where you have never been before. A book can give you a fresh new perspective, open your mind, and give wings to your imagination. It can throw light in the darkest corners of your mind by making you aware of various aspects of the world.

Many successful millionaires read books. In an interview, Bill Gates mentioned that he is very fond of reading and reads around fifty books per year. And Elon Musk who is the brilliant mind behind Tesla and SpaceX is no exception.

Whenever Musk is asked about how he learned to build rockets, he says, “by reading books.” Not only this genius reads them but also devours them. Musk has a personal library and offers some recommendations of his own.

Here are the top 10 books recommended by Elon Musk:

1. Life 3.0: Being Human in the age of Artificial Intelligence| By Max Tegmark

Will superhuman intelligence be our slave, or become our god? What will the future look like? Taking us to the heart of the latest thinking about AI, Max Tegmark, the MIT professor whose work has helped mainstream research on how to keep AI beneficial, separates myths from reality, and utopias from dystopias, to explore the next phase of our existence.

How automation can help us grow our prosperity, without leaving people lacking income or purpose? How can we ensure that future AI systems do what we want without crashing, malfunctioning, or getting hacked? Should we fear an arms race in lethal autonomous weapons? Will AI help life flourish as never before, or will machines eventually outsmart us at all tasks, and even, perhaps, replace us altogether?

2. Twelve Against the Gods| By William Bolitho

Encompassing the timeless values of perseverance, bravery, and strength of spirit; this book consists of essays that are nearly one hundred years old but still that have proven to resonate with the pioneers and thought leaders of today.

It's a vibrant and definite sea change from the way business was always done, when financial profit was a driving force. Today, people aren't afraid to say, Screw business as usual!-and show they mean it. Richard Branson is one of the world’s most famous and admired business leaders. He argues in his book that it is time to turn capitalism upside down-to shift our values from an exclusive focus on profit to also caring for people, communities, and the planet.

4. Waiting for Godot| By Samuel Beckett

‘Waiting for Godot’ is a valuable book that begins with a summary of the play and its origins and editions. It then explores the play's meaning and the historical and intellectual contexts informing Beckett's work. The book then examines Beckett's dramatic art and gives full coverage of the play's performance history. A bibliographical essay surveys the most important critical studies.

Whether he was courting public attention in the roles of aviator, playboy, and entrepreneur, or shunning it as a recluse, Howard Hughes commanded headlines throughout his career. Yet the image of his life, his power, and his business empire that caught the public imagination was almost completely false. This book revolves around his life, revealing the multiple layers page by page, taking its readers closer to the reality of his life.

Human beings are blessed with some of the most amazing capabilities that the other species on this planet lack. It is these capabilities that put humans in a more dominant position. Where other animals have stronger muscles and sharper claws, humans possess the ability to think with their cleverer brains. Read the book and learn about genies, oracles, singletons, and a lot more intricate concepts.

Benjamin Franklin is the founding father who seems made of flesh rather than marble. In a sweeping narrative in this book that follows Franklin’s life from Boston to Philadelphia to London and Paris and back, Walter Isaacson chronicles the adventures of the runaway apprentice who became, over the course of his eighty-four-year life, America’s best writer, inventor, media baron, scientist, diplomat, and business strategist, as well as one of its most practical and ingenious political leaders.

8. The Machine Stops | By E.M Forster

The Machine Stops" is a science fiction short story (12,300 words) by E. M. Forster. After initial publication in The Oxford and Cambridge Review (November 1909), the story was republished in Forster's The Eternal Moment and Other Stories in 1928. It was voted as one of the best novels in 1965.

A history of Greek civilization from the beginnings, and of civilization in the Near East from the Death of Alexander to the Roman Conquest of Greece!

Inspiration can be anywhere! And if you want to be a successful entrepreneur reading could be a great way to increase your knowledge and awareness. These 10 books recommended by Elon Musk should be on your reading list.

The idea of managing a business is easier said than done and we completely agree with you. This is why to help you move forward with your business goals, we at Bada Business offer an exclusive Business Coaching Program that comes with Foundation courses, specialized courses, and value-added courses. To know more, visit: www.badabusiness.com