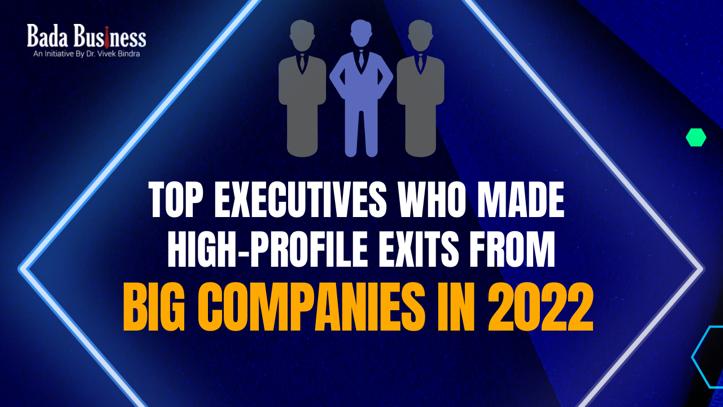 After the much-needed boom post-covid in the year 2021, 2022 proved to be a challenging year for the corporate environment globally. In reaction to the changing commercial landscape, many entrepreneurs started afresh, while others decided to restructure their organizations this year. As a result of the economic crunch and the increasing attention on the economy, layoffs intensified throughout the year.

All of these led to changes in numerous firms' top-level leadership, resulting in many of the companies seeing the departure of their founders. Along with the founders, a lot of CEOs left the companies too.

Let's look at the leading exits from the corporate ecosystem as they happened in 2022.

The co-founder of the fintech startup BharatPe was fired from all of his posts on March 2 after the company accused his family of misusing the company's funds in a significant way.

Grover left the company soon after learning that the Board of the company would receive these results. The Grover family allegedly used fictitious vendors to steal money from the business's expense budget to support their extravagant lives.

The major social media platform's new owner, Elon Musk, fired top executives for deceiving him and offering no detail on how they would carry out the ambitious goals he has set for the platform.

According to reports, Musk fired Twitter's CEO Parag Agrawal, CFO Ned Segal, and head of law and policy Vijaya Gadde. He had claimed that they had misled him and Twitter's investors over the prevalence of fictitious accounts on the social networking site.

Sheryl Sandberg, the chief operating officer of Meta Platforms Inc, left the firm after 14 years. Her tight relationship with chief executive officer Mark Zuckerberg fueled the expansion of the largest social network in the world.

On June 1 it was announced that Sandberg, who had held the role for more than 14 years, would be leaving. Javier Olivan, the chief growth officer, took over. Moving forward, Sandberg continues to work with Meta but she will only be a board member.

Bob Iger returned to his role as the CEO of the Walt Disney Company after less than a year in retirement. The board of the corporation announced that Bob Iger is returning and that Bob Chapek, who was recently given the position, is leaving. Iger started serving as CEO for a second time for the following two years after handing the reins to Chapek in February 2020, an unprecedented move at the time. Iger then served as executive chairman till the end of 2021.

The producer of Dettol and Lysol cleaning products, Reckitt Benckiser claimed that Narasimhan left for personal reasons and moved back to the US and that he has been contacted about a new opportunity. The company made no additional comments. While stating that the company examines and picks the future leadership, Laxman was replaced by their senior board member Nicandro Durante.

Surprisingly, Adidas announced that its CEO Kasper Rorsted would step down from his position in 2023 before his contract was set to expire and that it had already begun looking for a replacement. The CEO's transition to a new role during 2023 was mutually agreed upon by Rorsted and the company’s board of supervisors.

However, he will continue to serve until a replacement has been named.

After nine years in command, Shell CEO Ben van Beurden stepped down from the top position of this energy giant. This change came as oil and gas corporations are facing pressure to move away from burning fossil fuels even as they enjoy booming profits from energy prices boosted by Russia's conflict in Ukraine. The largest energy business in Europe will be led by Wael Sawan from the new year. Sawan has spent the majority of his career working for Shell's oil and gas division before recently transitioning to its oil and natural gas and renewable power division.

Syngal, who was appointed the CEO of Gap Inc just two years back, quit the company only a few months after it lowered its prediction for yearly earnings as a result of pressure from the sluggish market in the face of decades-high inflation. Gap did not explain her abrupt departure. Executive Chairman Bob Martin stepped in as interim CEO.

Amit Burman resigned as the company chairman of the fast-moving consumer products company Dabur India Ltd. effective from August 10, 2022. However, Burman continues to serve as a non-executive director. The non-executive chairman position has been taken over by Mohit Burman. In 2019, Amit Burman was appointed chairman of Dabur India. He assumed leadership of Dabur Foods in 1999 and left the position in 2007 when the business was combined with Dabur India Ltd.

Ashishkumar Chauhan left his positions as managing director and CEO of the BSE and was released from his duties at the exchange to join the NSE again after 20 years. Chauhan became the Managing Director and CEO of the competing firm National Stock Exchange (NSE). He was a member of the NSE founding team but departed in 2000 to take up several positions with Reliance Industries. He later returned to the stock market as the deputy CEO of the BSE in 2009 and became the company's CEO in 2012.

The upcoming year of 2023 won't likely have a significant impact on the success of the startup ecosystem. Due to the difficult global financial backdrop, the startup ecosystem is also set to face challenges in the future year. More restructuring and attrition at the executive level in organizations are probably to follow from this. Additionally, mergers and acquisitions cannot be completely ruled out and may result in additional CEO and founder exits.

You can submit your comment regarding the article by commenting in the comment section. Apart from this, if you are a businessman and you are facing difficulties in your business and you want to get good advice from a personal business coach to move your startup business forward, you must choose the Super Sales Secrets webinar. You can get a good grip in business and grow your business four times. To be part of the program, you can register from this link- https://www.badabusiness.com/webinar/ibc/weekly_event?ref_code=dmtvbswebinar