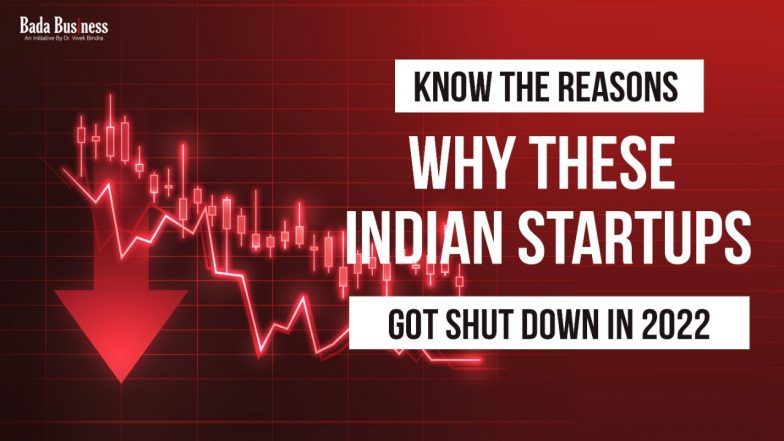 The Indian startup environment has undoubtedly grown tremendously over the past five years, becoming the third-largest startup ecosystem globally after the US and China. The record-breaking financial inflow into India in 2021 contributed to the enthusiasm of Indian entrepreneurs. Then 2022 arrived, a year that will be recalled in the future for all the opposite reasons.

Due to a lack of funding, eight Indian firms had to close their doors in 2022. Five of the eight startups that closed their doors were in the Edtech industry. In addition to shutting down, many large software firms and unicorns had to close their cash-draining sectors to combat the mounting costs. For instance, Ola liquidated Ola Dash, Ola Foods, and Ola Play, three of its verticals.

The abrupt closure of Lido Learning's services on February 4, 2022, left 150 of the company's employees with serious doubts about their futures. Some of the well-known angel investors supported the EdTech business. Vijay Shekhar Sharma, Mukesh Bansal, Anupam Mittal (founder of Shaadi.com and Shark Tank India judge), Ananth Narayanan (founder of MedLife), and Ronnie Screwvala (founder of UpGrad) were the ones supporting this firm.

ShopX, a B2B e-commerce startup supported by Nandan Nilekani, ceased operations because it was unable to produce enough working capital and is in default on various loans it obtained from its backers, namely Infosys co-founder Nilekani and Singapore-based FSX PTE LTD. To assure that there are no additional recurrent payment obligations, ShopX significantly cut its personnel strength, as stated in the company's bankruptcy case.

After the opening of schools offline, the Edtech startup Udayy laid off 100–120 staff and shut down as a result of a slowdown in sales. The Gurugram-based firm, which was established in 2019 by Karan Varshney, Mahak Garg, and Saumya Yadav, provided learning and education services for children of kindergarten to eighth grade and was serving about 5,000 students each month.

According to some reports, the cofounders of the Edtech business for extracurricular activities told the staff at a town hall about their plan to cease operations. Ankit Agarwal and Vikas Bansal, the company's co-founders, explained to workers why they decided to wind down operations: a lack of finance and the reopening of schools.

The startup's operations were suspended earlier this year as a result of a lack of funding, waning investor interest, the reopening of schools, and other factors, according to SuperLearn co-founder Kunal Bhatia, who made this statement on LinkedIn. SuperLearn shut down early this year intending to pay back its investors. It was obvious that the fiesta was approaching its conclusion since no one appeared to be believing the Edtech narrative any longer.

GoNuts' founder decided to stop business operations in October of this year since the startup's target market was not expanding. From investors including former Zomato cofounder Pankaj Chaddah, Ramakant Sharma, and LetsVenture, among others, the business had raised more than INR 7 Cr.

The latest Edtech start-up to surrender to the ongoing financial freeze and suspend operations was the Noida-based Edtech platform Qin1, which discontinued operations due to a lack of readily available capital.

The creators of the firm, who had been providing live online lessons on coding and the English language to youngsters and teenagers between the ages of 6 and 18, were unable to secure a new round of funding, which led the company to halt operations a few months back.

These were some major startups that sadly had to close their doors in 2022. The recession-related global funding crisis, which caused many valuations to be revised went downward, and this has contributed significantly to this decline. This year saw patchy startup growth, which was followed by a large number of firms ceasing operations in India.

The coming year has a lot of challenges for the Indian Startup arena, we can only hope that the new-age companies will counter every challenge and emerge victorious in the end.