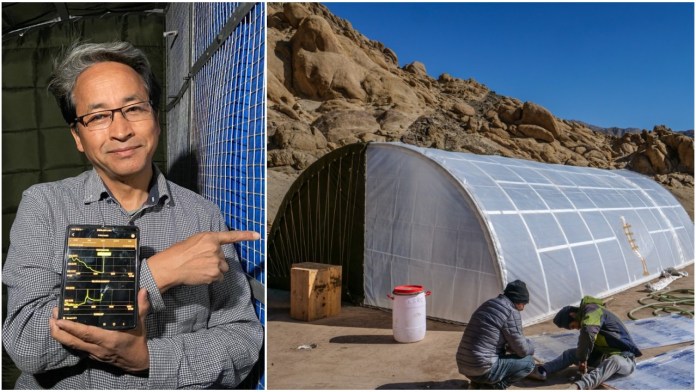 While some people use their knowledge and wisdom to gain fame and money, some people in India have been an inspiration for the entire nation. And, today we are talking about none-other-than Sonam Wangchuk- the man behind the character of ‘Phunsukh Wangdu’ in the Bollywood film ‘3 Idiots’.

Known for his creative solutions to practical problems, the innovator and education reformist has found a solution to keep the Indian Arms soldiers in the Ladakh region warm. Sonam Wangchuk has built a solar-powered portable military tent for soldiers to keep them warm in the sub-zero temperatures of Ladakh.

While the tent can accommodate up to 10 soldiers at a time, the fully portable tent weighs less than 30 kgs. On Friday, 19th February 2021, Wangchuk also shared the images of his solar-powered military tent. This latest innovation by Sonam Wangchuk has left everyone amazed, including some of the most influential personalities.

Appreciating his efforts, the chairman of Mahindra Group, Anand Mahindra tweeted, “Sonam, you’re the MAN! I salute you. Your work is energizing, even this late in the evening…”

Who is Sonam Wangchuk?

Though most of us are familiarized by the lead character of Phunsukh Wandu, Sonam Wangchuk is an Indian engineer, education reformist, and innovator. Born on September 1, 1966, he is the founding director of the Students` Educational and Cultural Movement of Ladakh (SECMOL). The school came into existence when a group of students who were the ‘victims’ of an alien education system decided to bring the education system.

Sonam Wangchuk is also known for designing the SECMOL campus that works on solar energy for cooking, heating, and lighting. He has also invented the Ice Stupa technique that creates artificial glaciers. It is used to store water during winters in the form of a conical-shaped ice heap.

Have an idea that holds the power to bring a revolution in the world? Do not hold yourself back and start working on it. Because success is not a place, rather it`s a journey that never stops at one place.