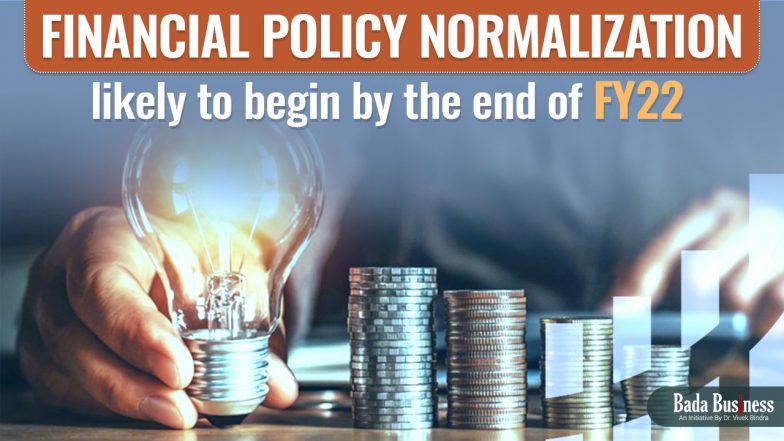 With the interest rates continually declining, the Reserve Bank of India may start tightening the monetary policy. The gradual normalization of the policy is likely to begin by the end of this financial year.

While the CPI inflation moderated marginally to 6.26 percent, the retail inflation declined in June but remained above the 6 percent threshold for the second consecutive month.

A Kotak report noted that a peak in inflation may provide comfort to MPC.

"Softer-than-expected CPI inflation along with broad-based moderation in core inflation is expected to provide relief to the MPC to continue with the pro-growth policy guidance in the near term. While much depends on the incoming data, we expect the onset of gradual policy normalization towards the end of FY2022," it said.

Core inflation (CPI excluding food, fuel, and pan, tobacco) moderated to 6.2 percent, with flat sequential momentum following a surge of 1.5 percent M-oM in May. After a broad-based increase in the components of core inflation in May, prices have risen a lot lesser in June across all categories except transport and communication.

"We expect core inflation to average 6.1 percent in FY2022 (5.3 percent in FY2021) amid pass-through of global commodity prices and pickup in demand across various services sectors through FY2022," it said.

While the headline inflation remains elevated above MPC's upper threshold of 6 percent, the June print suggests that inflation may have peaked and the trajectory in 3QFY22 will moderate towards an average of 4.7 percent.

"We expect RBI to continue to maintain a pro-growth bias in the August policy focus given that a large part of the increase remains supply-driven and, hence, transitory in nature," it said.

However, as economic activity begins to normalize with progress in vaccination, RBI's room to ignore the inflationary risks, as well as a closing of the negative output gap, will be restricted, prompting gradual monetary policy normalization from October, although much will depend on the evolution of the pandemic, vaccination, and data, it said.

How the Revised Exchange Rates by CBIC will Impact Businesses in 2021?