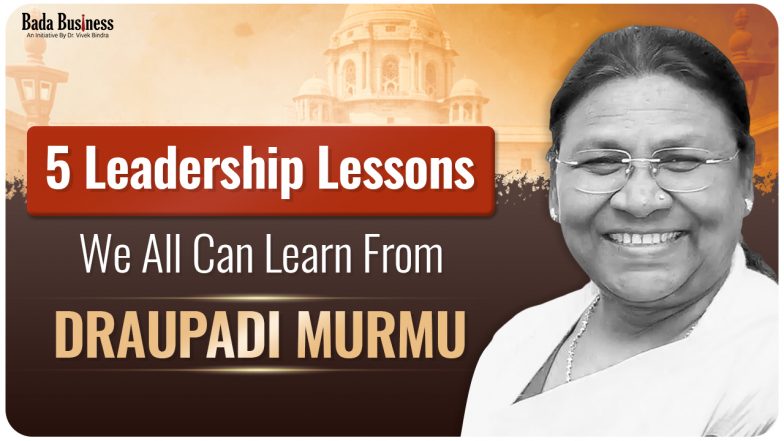 Summary: Draupadi Murmu who has been elected as the 15th President of India is also the first tribal woman to become the country's President.

The race for the Presidential seat that has many prominent personalities like Yashwant Sinha is finally over with Draupadi Murmu winning the presidential polls by an overwhelming margin.

Born on June 20, 1958 in Odisha's Mayurbhanj district, Draupadi Murmu hails from a tribal community. She came into the national spotlight after being picked as the presidential nominee in the July 2018 polls. Spanning two decades, she has had a very illustrious career graph.

However, her journey was not completely a bed of roses. Life has tested her patience and grit at every step. Despite the challenges, she stood tall and kept on moving forward.

From living in a hut with her family to Rashtrapati Bhawan which has 340 rooms, she is a living inspiration for all of us.

Today, Murmu has become an ideal not only for India but for billions of people around the world. Here are 5 leadership lessons from her life that we all can learn when it comes to following our dreams:

Born on 20th June 1958, Murmu hails from Mayurbhanj in Odisha. Coming from a tribal family, her childhood was spent in extreme poverty in the country's most remote and underdeveloped district. Many basic amenities that we relish so commonly were not even available in her village.

Despite the atrocities that life threw at her, she went ahead and finished her schooling between 1969 to 1973. She went to pursue her bachelor's from Rama Devi Women's College in Bhubaneshwar. Murmu became the first woman from her village to go to Bhubaneswar to complete graduation and received her Bachelor's degree in Arts.

Coming from a very humble background, Draupadi Murmu got married to Late Shyam Charan Murmu. The financial situation was more or less the same. In 1984, Murmu lost her firstborn daughter when she was just 3 years old. Between 2010 to 2014, she lost her two young sons and her husband. The loss was too much to bear and she also slipped into depression for some time. Despite this heart-wrenching loss, Murmu gathered herself and did not let her grief stop her from chasing her dreams and the rest is history.

Draupadi Murmu started her career as a teacher in Aurobindo Integral Education Center, Rairangpur, Odisha, and later joined politics. She took up this role so that she could teach her daughters as well.

Her political career started as the vice-chairman of the Rairangpur NAC. Draupadi Murmu was honored by the Odisha Legislative Assembly with its Best MLA of the Year 2007 award. She was the first Odia woman and tribal leader to be named governor of an Indian state. She served the full term of her office.

4. No Dream is Too Small

Elected at 64 years and 46 days, Murmu is the youngest President of India. While taking an oath as the 15th President of India, she said, “My election is proof that the poor in India can dream and make them come true."

Murmu also served as the President of BJP`s Scheduled Tribe Morcha in Odisha between 2006 to 2009. In 1997 she was elected as Councilor in the Rairangpur Nagar Panchayat, and later on, became Vice-Chairperson.

Draupadi Murmu who was sworn in as the 15th President of India had to experience many challenges that life threw at her. Often in life, we encounter situations that have the

power to break us down. But the real courage lies in getting back again and overcoming those challenges to follow our dreams.

From living in a place where even the basic amenities were not available to residing in 340-room Rashtrapati Bhavan which is laced with amenities, Draupadi Murmu`s journey has been a roller coaster. She has faced many challenges and learned to overcome them with her sheer courage, persistence, and determination toward her goals.

Draupadi Murmu is a true example of a powerful leader who with her determination, true courage, and perseverance chose to stand tall instead of lying down and giving up. Her journey has been an inspiration to millions of us to never stop trying, no matter what!

The idea of managing a business is easier said than done and we completely agree with you. This is why to help you move forward with your business goals, we at Bada Business offer an exclusive Business Coaching Program that comes with Foundation courses, specialized courses, and value-added courses. To know more, visit: www.badabusiness.com