Zomato-Blinkit Deal: Here is everything you should know! 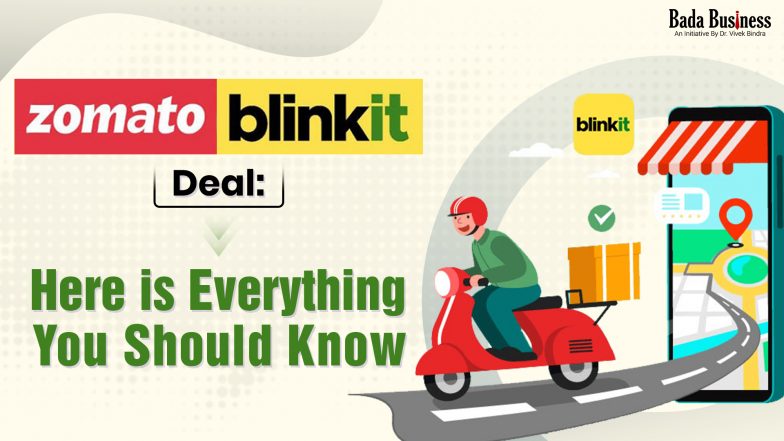 Zomato-Blinkit Deal Here is everything you should know!

After approval of the proposed acquisition, food delivery application Zomato plans to start integrating Blinkit on multiple fronts. On June 24, 2022, Zomato announced that its board had approved the acquisition of quick commerce company Blinkit for INR 4,447 crore.

According to the terms of the agreement, Blinkit shareholders will get a cumulative stake of 6.88 percent in Zomato, and the target company’s leadership team, including co-founder and CEO Albinder Dhindsa, will continue to hold their positions in the company.

The move comes at a time when Zomato is gearing up for 10-minute delivery. It has been said that "Zomato Instant" is already on track in Gurugram along with dark stores and how they will help Zomato in its 10-minute delivery plan.

A dark store is a micro-fulfillment center for online orders. It is a retail distribution warehouse or center that is specifically dedicated to those who shop online. A dark store acts as a lifeline for quick commerce platforms like Blinkit and Swiggy Instamart that promise to deliver groceries to customers within 15 to 20 minutes.

Blinkit has visibility into inventory owned by third-party distributors and retailers that stock about 4,000 stock-keeping units (SKUs) across a variety of product categories in a network of warehouses and distributed dark stores. Even after shutting down several dark stores in the recent past to cut losses, Blinkit still has about 400 such stores as of May 2022.

Zomato’s founder and CEO, Deepinder Goyal, said in a blog post announcing the deal, "Quick commerce has been our stated strategic priority since the last one year." He says quick commerce’s close synergies with Zomato’s core food business give the company the right to win in the long term.

Now that Zomato has acquired Blinkit, the priorities will be customers, cross-selling products, and delivery fleet integration. "We will experiment with different ways of integrating the two customer bases or rather make sure that we are able to leverage Zomato’s customer base for the growth of the Blinkit business," said Zomato CFO Akshant Goyal. Zomato may consider moving the Blinkit to the Zomato app.

Blinkit had become a unicorn—a privately held company with a valuation of $1 billion or more—last year following a $120 million funding round from Zomato and New York-based investment firm Tiger Global. Zomato invested $100 million in Blinkit when it was operating as Grofers before the food delivery company was listed on Indian exchanges last year.