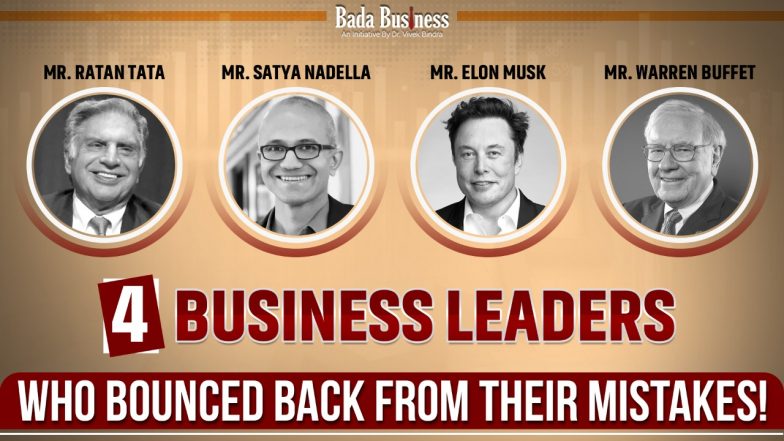 “Courage is not the absence of fear, but rather the judgment that something else is more important than fear.”  - Meg Cabot

One of the scariest things that almost every human being feels to do is to make mistakes, to take risks and meet failure, to try out of the league and fall hard. But mistakes are essential for professional as well as personal growth for both the individual and the organization.

We all make mistakes, every one of us. Making mistakes is a sign of business motivation, and that we are trying something new in your life. It is the pathway to great ideas and innovation. It is the best way to learn and grow. If you are not making mistakes, then we likely are not doing enough new things outside our comfort zone, and that itself is a blunder mistake.

If you thought only common people like you and me are prone to making mistakes in the business, think again! Legends like Ratan Tata, Narayan Murthy, Satya Nadella, Steve Jobs, and many other successful millionaires have made mistakes and learned from them too!

Here are some mistakes that these leaders made, but learned from it to bounce back in their lives:

The most esteemed and respectable personality in the business world, Ratan Tata needs no introduction. The Chairman of Tata Trusts and former head of Tata Sons have achieved great success with his incredible business ideologies and strategies. However, even he admitted his mistake when his much ambitious TATA NANO project failed to create waves in the market.

You can watch the full story of what led to the failure of TATA Nano, right here to get some business motivation from this legendary industrialist.

The Indian-born Satya Nadella made headlines when he replaced billionaire Steve Ballmer as Microsoft CEO in 2014. Before he replaced the former CEO, Nadella was Microsoft EVP of the cloud and enterprise group. Since he took over the charge, Microsoft`s stock has increased by more than 150%. However, this was not always been the case.

In July 2015, the Microsoft CEO acknowledged that thinking that the personal computer (PC) will reign supreme forever was his biggest mistake. Today, smartphones have overshadowed PC as the hub for everything to some extent.

He has steered Microsoft away from a failing mobile strategy of NOKIA, and focused on other segments, including cloud computing and augmented reality.

Elon Musk, who is the founder, CEO, and Chief Engineer at Space X is also the CEO of Tesla Motors. A successful entrepreneur and a business magnate have also made mistakes that he still regrets. While participating in a Q&A at South by Southwest, the Tesla CEO said that the biggest mistake that he committed in his career was not being more involved with Tesla in his initial days.

From 2004 to 2008, Elon Musk was a lead investor in Tesla. However, he was also the CEO of SpaceX, a space exploration company. Today, he has moved past his mistakes and regrets to run a successful million-dollar company.

The year 2015 marked the 50th anniversary of Warren Buffet and his partner`s decision to take control of Berkshire Hathaway. However, the current CEO of Berkshire Hathaway once considered it to be the biggest investment mistake and called it a “monumentally stupid decision”. He said that the only reason behind him acquiring the company was because it was cheap.

The majority of entrepreneurs and professionals are not particularly interested in making mistakes and reliving them. However, many self-made millionaires are masters at learning from their successes and failures. That is the only way to analyze what went right, and what didn’t work out for the business.

So, keep making new mistakes, but find reasons for their failures and ensure that you do not repeat them. That’s the key to success and gaining incredible experiences in the journey called LIFE.

Prepare yourself to counter the challenges that you might encounter on your entrepreneurial journey with our online business courses for entrepreneurs. You can take ‘Entrepreneurship Course’ and take the first step towards achieving your dreams.

5 Ways To Establish Your Personal Brand

Top 10 Quotes On Entrepreneurship To Keep You Motivated & Inspired

How To Find Your Passion In Professional Life?