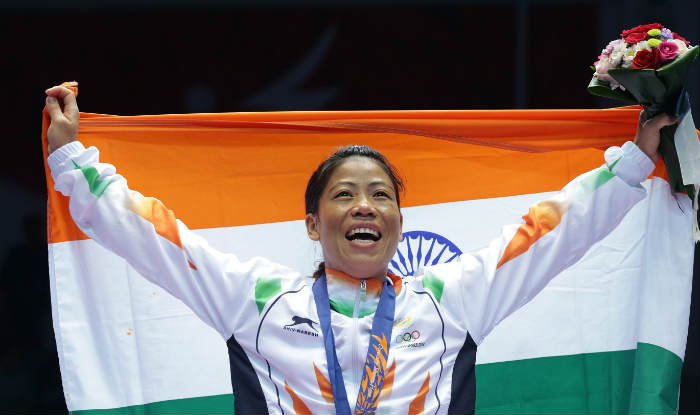 The world has two types of people- achievers and fighters. But only those who are filled with true passion and determination belong to this category. Mary Kom is both- the real champion of the society.

Mary Kom has not only been an inspiration for women across India but also around the world. She has made the country proud by winning six World Championships and an Olympic bronze.

Mary Kom`s real name is Mangte Chungneijang. She was born in Manipur in 1983. Her parents, Mangte Tonpa Kom and Mangte Akham Kom worked in jhum fields. Coming from a very humble background, Mary had to undergo a lot of hardships and inconveniences and created a name for herself in the world of boxing.

Just like other girls in the village, Mary Kom also worked in fields to help her parents. Along with working in the fields, she also took care of her younger siblings. During her school days, she showed intense interest in athletics along with many other sports like football, and hockey. She took up sports to aid her family with financial support. However, she never showed any interest in boxing.

Mary Kom`s father was a former wrestler player at his young age. But he never wanted his daughters to pursue the same. However, destiny has its plan. It was the success of Dingko Singh that inspired her to become a professional boxer player.

Instead of looking for excuses and blame her financial condition, Mary Kom decided early on that she would build her strength. In 2000, Mary Kom began her boxing training under the coach K. Kosana Meitei in Imphal.

The journey to becoming a professional boxer player was not easy. As Mary`s father was not in the favor of her stepping inside the ring, she had to hide her interest in boxing from her family. Her father shouted at her when a photo of her winning the state boxing championship was printed in the newspaper.

Mary Kom made her first debut at the Women World Boxing Championship at the age of 18. After just one year of starting to learn boxing, she won a silver medal in the 46 kg weight category.  Later on, she won a gold medal at the second Association International de Boxe Amateur (AIBA) World Women`s Senior Boxing Championship that was held at Antalya, Turkey.

Mary Kom, a mother of twin sons, has won six world records. She wasn`t born in an affluent sportsperson's family, hence did not have the privilege of training with the best at the early stages of her career.

Post her marriage in 2005, Mary Kom became the mother of twin sons in 2007. She took a short break until the birth of her kids, but started training again and achieved success in the following year. Married to Karung Onkholer, Mary Kom won much recognition in her career:

“Unbreakable”, an autobiography of Mary Kom was released in 2013 by Harper Collins. Mary Kom, a headstrong girl, did not give up on her dream and followed it passionately. She is an inspiration to women who dare to dream big!

5 Inspiring Indra Nooyi Quotes to Remind Everyone that no dream is too big!