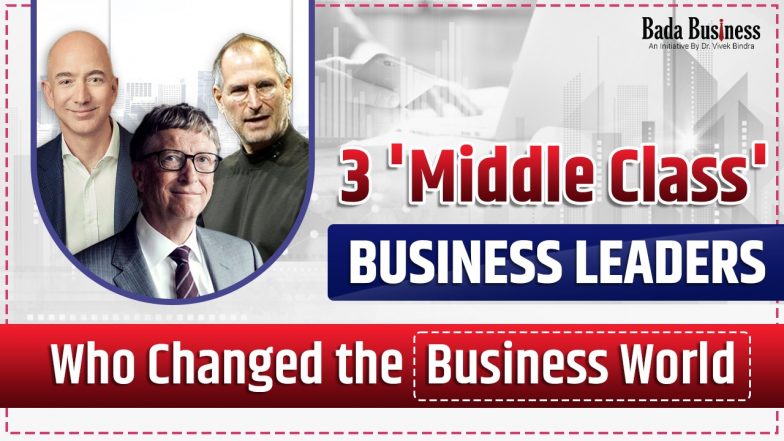 Jeff Bezos, Elon Musk, Bill Gates, and late Steve Jobs- what do these names have in common besides being famous and at the top list of richest people in the world today?

Apart from their incredible business sense and passion to do something in their lives, one common thing is that they all hail from humble backgrounds. All of them are of middle-class origin, who courtesy to their ambition and aspirations have changed the world since the end of the last century, and to the present one.

If you have seen their biographies, you will notice that they all come from the American middle class or even from other countries. These people who define success on their terms are the product of “aspirations” that can`t be learned in any online business course.

But what does it reflect for young entrepreneurs who want to start their business, but hold back because of their social class?

It sends out a strong message to our youth that these business leaders who hail from made a mark in the world achieved success from their aspiration of a social class that does not enjoy the great privileges of luxuries. They overcome their vulnerabilities and have made a better life for themselves and their fellow men.

Jeff Bezos's mother is Jacklyn Gise married Miguel Bezos- Jeff`s adoptive father, from whom received the surname. He completed his graduation in computer science engineering in 1986 from Princeton University. After his graduation, Jeff began working immediately in various companies of medium prestige.

His family was settled in Miami, Florida and when Jeff started his first business it was his parents who brought him his initial capital. His book sales company was installed in the garage of a house in Seattle. Nobody imagined that he was laying the foundation of today`s giant- Amazon.

And the rest is history. Jeff Bezos had a middle-class childhood and adolescence with high aspirations. Perhaps, he never imagined that one day with his positive mindset, he will become one of the richest men in the world.

If you too want to begin your startup, begin by making yourself equipped. Enroll yourself in an online business course and learn everything about the business world.

Bill Gates spent his childhood and adolescent years in the city of Seattle. Gates's father was a lawyer, while his mother was a teacher. The family income was modest through which his parents managed to provide him with a high-quality education.

In 1975, he founded a company called Microsoft, which over the years became one of the brands that changed the world. To know more about how being merely a student, he managed to establish a company, watch this brilliant case study on Bill Gates by Dr. Vivek Bindra, the best motivational speaker in India.

3. Steve Jobs, the benchmark of Success

The late Steve Jobs is the benchmark of success derived from great aspirations. There is no one else in this world that can even come an inch closer to this title. Jobs during his living years and beyond is the overwhelming proof that the origins and your social class have nothing to do with your quench for triumph.

Steve Jobs's biological parents gave him up for adoption to a classic middle-class American couple- Paul Jobs and Clara Hagopian. The adoptive father was a railroad engineer and his mother was a housewife. The couple raised him with great effort.

His corporate journey began in 1976 with the start of Apple which he began with his friend Steve Wozniak in a garage. Death cut his life short in 2011. But this legend utilized his living years to transform the way this world had known computers.

We will not recommend you to miss out on his inspirational journey! Watch it here:

These millionaires and billionaires come from humble backgrounds. With moral values, integrity, passion, and high aspirations they have changed the world forever for the better. They are moved by the desire to promote economic development and the benefit of their own and society.

To give your aspirations wings, you can take our “Entrepreneurship Course” through which you will gain in-depth knowledge about the distinct business dimensions.

3 Uber Smart Marketing Tips That Will Make Your Brand Viral At Zero Cost!

Grow Your Startup Business With These 5 Effective Leadership Qualities