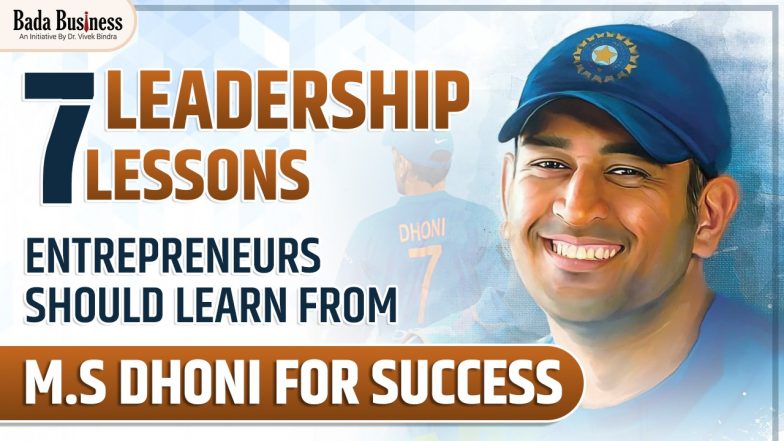 An outstanding batsman, an excellent wicket-keeper, and a powerful leader- Mahendra Singh Dhoni was one of the brilliant captains in Indian cricket history. He has developed an extraordinary reputation for being one of the greatest leaders that the game of cricket has ever seen.

His list of achievements is so long that we can keep on writing and still some of them will be left behind. But there is one amazing trait of our former Indian captain that deserves special mention- his leadership skills.

M.S. Dhoni has an arsenal of leadership skills that entrepreneurs can certainly apply both personally and professionally. Here are seven incredible leadership traits that are a useful template for business captains too:

1. Being True to yourself & Confident

Confidence is the key to success and M.S Dhoni is the best example of that. Even though he comes from a very modest background, he never let this hold him back from achieving his dreams. On the field or off the field, Dhoni is always confident, forthright and often surprises his fans, audience, and media with his witty comments.

Staying true to yourself will not just carry you far in the sporting world, but also the corporate as well as the business world.

Despite the presence of many senior players in the team, Dhoni was chosen as the captain of the Indian Cricket Team in 2007. It was a tricky situation that could have backfired had it not been handled wonderfully by Dhoni. After becoming the captain of the team, he did not rush to make changes to mark his stamp. Instead, he took his time about making changes and maintaining strategies that had been proven useful.

This is something that new entrepreneurs or managers can learn from Dhoni. In business, many managers or senior leaders have to contend with and manage the egos of various people in their team. However, patience is the key to win the hearts even of those with the iron ones. Some can also listen to leadership speakers in India to enhance this essential trait.

M.S. Dhoni has earned the title of “Captain Cool” due to his calm and composed demeanor on the field even during nail-biting moments. Even when severely tested, he manages to not lose his temper which used to influence the entire team to resist caving in. He kept inspiring the team like the best motivational speaker to perform at par no matter what the situation is.

This is one of the most crucial leadership skills for entrepreneurs to keep calm and not give up when the situation is not in their favor.

Dhoni well-received fame and money at a very early stage in his career. But he was and still is, humble and modest. He did not let the success get over his head while maintaining a steady path.

We often see that entrepreneurs who gain success too early often lose their focus and balance. They are unable to maintain the poise that is required for the business's success in the long run.

To remain focus on your goals amidst all the criticism is no child`s play. But Dhoni showcased his indomitable spirit of remaining focused on what is important during the Champions Trophy amidst the controversy that surrounded the Indian Premier League.

An ability to cut through the clutter, distraction, and negative energy is one of the best marks of a strong leader in every situation. If you want to become a powerful leader, you can hire one of the best leadership speakers in India- Dr. Vivek Bindra.

Handling failure is as important as handling success. And no one has ever done it better than the former Indian captain M.S Dhoni himself. In the 2011 World Cup, Dhoni and his team were performing spectacular but then suffered a string of losses. However, the captain cool fought back by showcasing a world-class game of cricket combined with his high spirits.

Ups and downs are part of an entrepreneurial journey. Businesses tend to suffer some degree of failure at some point or the other. But, if you want to be successful, you will have to have the courage and strength to bounce back without losing faith in your dreams.

Just like no cricket team can win a match without the contribution of its 11 players, no company or organization can succeed without the team's efforts. Dhoni has always believed in encouraging and supporting his players at all times with his trust and confidence. This support from their captain has always inspired them to play like there is no tomorrow.

This is a golden trait of M.S Dhoni that makes him the most loved and respectable captain of all time. Entrepreneurs should feel safe to experiment and fail if they need to be. Managers must also come to terms with the fact that no organization or department can achieve its goals without their respective team members.

M.S Dhoni is known not only for his famous ‘helicopter shot’ and his excellent class of game but also for his unmatched leadership skills and team spirit. Young entrepreneurs can learn big lessons from him about how resilience and focus can help their businesses to grow.

To gain in-depth knowledge about building a startup from the scratch, join our ‘Entrepreneurship course’.

Invest In The Right Stock With These 5 Steps

5 Powerful Strategies To Increase Sales In A Startup Business