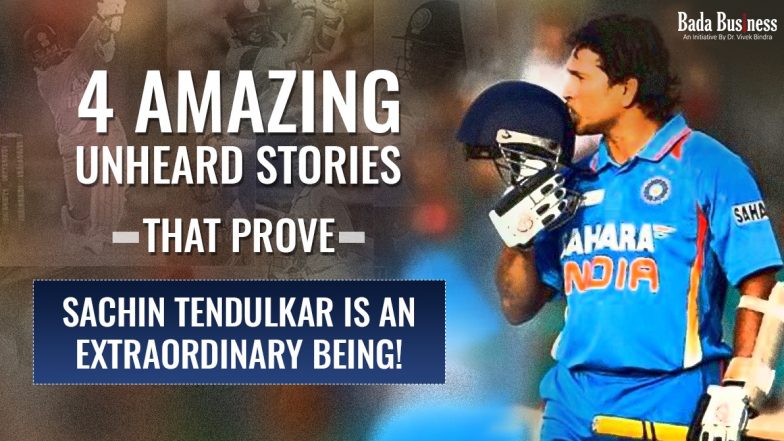 4 Amazing Unheard Stories that Prove Sachin Tendulkar is an Extraordinary Being!

No cricketer has ever walked on earth that has captured billions of hearts and minds, not only in his own country but in other countries and continents too. No sportsman has ever captivated the soul and spirit of a nation so strongly that people cried when he was given ‘out’ during a match.

The popularity that can even put Gods in a dilemma, no cricketer has set as many records and broken as many milestones as this ‘Little Master’, who is the living legend of Cricket.

Yes, we are talking about none other than the ‘master blaster- Sachin Tendulkar- a name that can certainly bring a smile to any sports lover. With hundreds of centuries in his bag, smashing every record in the book, Sachin isn’t just a cricketer. He is considered to be the “God of the Cricket”.

However, what makes him different from the rest of the popular players is his calm and composed demeanor.

Despite being adored all across the globe by his die-hard fans, he never let his roaring success get on his head. Sachin is a synonym of modesty, integrity, and humility.

And as he turns 48, today, we bring you stories from his life that will make you scream- “SACHIN…….SACHIN”….once again!

You can watch here:

Sachin started his cricket career at the young age of 16. It was on November 15, 1989, when he made his debut in international cricket. Though he has many world records under his kitty, his eyes were transfixed on the “World Cup”.

Despite being touted as one of the favorites for the ICC World Cup 2007, India couldn’t lift the trophy in West Indies. It was a terrible blow to hopes and came as a shock to the nation. The loss left Indian players along with the fans disheartened. Sachin Tendulkar was hurt so deeply that he didn’t leave his hotel room for two days and started thinking about retirement.

Later, he received a call from his batting hero Sir Vivian Richards who reassured him that such incidents are part of international cricket and that he should not quit as he has a lot of cricket in him.

That`s when he decided not to call it quits. India buried its demons when India lifted the World Cup trophy after four years in 2011, after defeating Sri Lanka at the Wankhede Stadium.

When Sachin received his first “Man of the Match” award in 1990, he was given a champagne bottle. As he was 17 years old at that time, he was not eligible for the consumption of alcohol. Though the star player could have opened the bottle privately at his residence, he rather waited and followed the law.

He opened the bottle, eight years later on his daughter`s first birthday in 1998. He also kept the emptied bottle as a memento.

Where most national and international players had ‘Four Square’ or ‘Wills’ on their bats, Tendulkar decided not to promote brands that are associated with alcohol or tobacco. Sachin Tendulkar`s father has told him to always be a role model as a lot of people follow him.  Despite getting multiple offers in 1990, he never endorsed any alcohol or tobacco products.

During India`s tour of Australia in 2007, Sachin hired an Indian Taxi. After some time, it started raining heavily. The taxi driver gave Sachin his jacket to keep him protected. Sachin was so touched by the generosity of the driver that he decided to do something in return for him.

Later on, he gifted the driver a brand new designer jacket, and one team jersey signed by the players of the Indian cricket team. Along with that he also presented him with match passes.

Sachin Tendulkar is a name that resonates with the game of cricket. He is admired by many great players for his sheer genius on the cricket pitch, and humble nature. He ended his 200-match career in white-ball cricket and has 15,921 runs in his name.

Tendulkar had played 200 Test matches during his illustrious cricket career. No other cricketer has played more than 168 (Ricky Ponting and Steve Waugh).

Tendulkar is the first-ever batsman to score a double century in ODI format and bid adieu to international cricket in 2013, leaving billions of his fans with moist eyes, and choked throats.