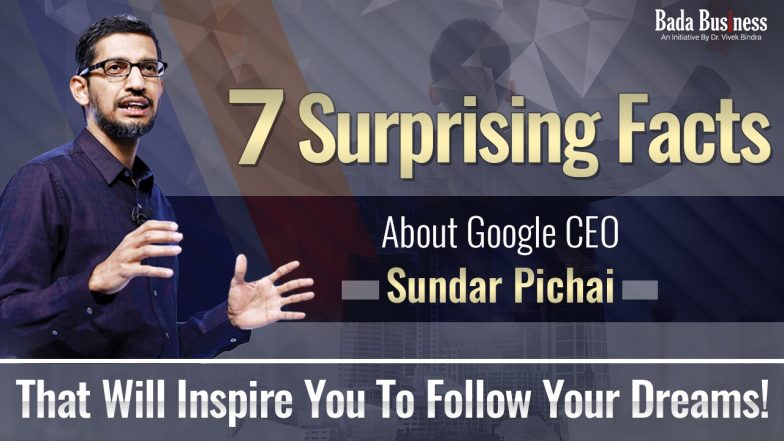 7 Surprising Facts About Sundar Pichai That Will Inspire You To Follow Your Dreams!

Sundar Pichai- a name that everybody reckons with is the Chief Executive Officer of Google Inc. With his poised demeanor, dedication towards his work, and his down-to-earth personality, he has become a global name for young entrepreneurs, who look up to him as an inspiration.

However, very few people are aware of his journey from a shy kid to the successful CEO of Google Inc.

Coming from a humble background, Sundar Pichai was born on 12th July 1972 in Madurai, Tamil Nadu India. His father was an electrical engineer and his mother was a stenographer. Sundar Pichai was a bright student since his early days that got him a seat in the prestigious Indian Institute of Technology, Kharagpur.

In a world that keeps evolving every second with technology; Sundar Pichai believes that young entrepreneurs must keep reinventing themselves. He believes that every entrepreneur must keep thinking about what should be the next best course of action and always deliver an out-of-box solution.

This Indian-American CEO of Alphabet Inc. has still not lost touch with his humble roots and has always emphasized staying positive in the face of adversities. Sundar Pichai is a man of high intellect and great personality. His success involved hard work, dedication, and passion that inspired him to keep working towards his goals. You Can also watch video on Sundar Pichai's life here:

Here are some of the most amazing facts about Sundar Pichai that might surprise and inspire you at the same time:

Sundar Pichai assumed control over Google`s business segments including ads, search, maps, Android, YouTube, and the Google Play Store following the reorganization of Google/Alphabet Inc. He was the genius behind the Google`s browser- Chrome.

Sundar Pichai, who firmly believes in providing out-of-the-box solutions for every business challenge has the habit of taking a long walk when he needs to think of something extraordinary. Not only in his leisure time, but even during the meeting, he would prefer to take a walk during crucial moments only to come back with an innovative and creative solution.

What makes Sundar Pichai more interesting? His humble personality! Sundar Pichai, who has a net worth of around $150 million today, started his early in a middle-class family. His father, who was an electrical engineer, had to save for three years to buy a scooter for his family.

Not only in technology, but Sundar Pichai also has a keen interest in playing football and cricket. During his school time, he was the captain of his school cricket team.

The tech giant Google had to negotiate with Sundar Pichai to retain him when there were talks that Sundar Pichai might move to Microsoft. Google retained him for $50 million in a year in stocks. Despite being the Chief Executive Officer of Alphabet Inc, he took care of the day-to-day operations of Google from 2014.

In December 2019, Sundar Pichai was named CEO of Alphabet when Larry Page stepped down, making him the CEO of both Google and Alphabet. Sundar Pichai received an MS degree from Stanford University and obtained his MBA degree from Wharton School at the University of Pennsylvania.

He worked at Applied Materials as an engineer formerly, and then at McKinsey & Company before his first job at Google.

Sundar Pichai is a real inspiration to young entrepreneurs who want to make name for them, by following their dreams with passion and dedication.

If you have an entrepreneurial dream, you can take our ‘Problem Solving Courses’ to gain in-depth knowledge about modern business tactics.

3 Exclusive Stories of Ajit Doval we bet you didn’t know Before!